The Verdict Is In: Six Person Jury Is the New Rule for Civil Trials in Illinois 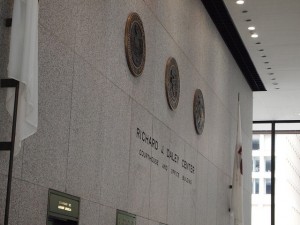 Effective June 1, 2015, all civil cases in Illinois will be tried by a jury of six, halving the longstanding tradition of deciding civil lawsuits with a twelve-person jury. Criminal trials will still be decided by a jury of twelve.

Senate Bill 307 (SB 307), now Public Act 98-1132 cuts the number of jurors in all civil cases from twelve to six and increases the minimum payment for jury service to $25 for the first day and $50 for each subsequent day. In addition, for all cases filed prior to the effective date of June 1, 2015, a party that has already demanded and paid for a jury of twelve, will still be entitled to a twelve-person jury.

Reaction to the new law is definitely mixed, with approval split along party lines–and between the plaintiff and defense bar. The bill was widely supported by the Illinois Association of Trial Lawyers who claim that the change will result in reduced costs and time savings to litigants and increased courtroom efficiency, all while encouraging jury service by increasing jury pay. Critics argue that the perceived benefits are minimal – particularly in light of the trade off in halving the numbers in a civil defendant’s “jury of their peers.” However, the six-person rule is not unprecedented, with federal courts and many states employing six-person juries in civil matters.

As a populist measure, most agree that the $17.20 paycheck Cook County jurors (jurors in other counties receive even less) receive for each day of service does little to offset the lost time and inconvenience of appearing for jury duty. But the question remains – is the new provision of $25 per day for the first day and $50 per day if selected to sit on the jury really a fair measure of jurors’ time and service? Probably not. The pay raise is definitely an improvement, but the people who complain that they cannot afford the lost time of jury service are not likely to be swayed by the increase.

Critics of the change also question whether the new law will save court time and costs. Criminal trials will still be tried by a jury of twelve. By the time a significant civil case reaches trial, the court time saved in selecting six jurors instead of twelve is unlikely to be significant to most litigants, particularly defendants who are losing the opportunity to present their case to an additional six people. Others claim that the new law will result in a lack of diversity of backgrounds and viewpoints on the jury. Conventional wisdom suggests that larger juries tend to moderate the size of jury awards. A smaller jury is more likely to be dominated by a strong personality, whereas there is more room for debate in a larger group where it is less likely that a single juror or small faction will control the discussion. Across the board, it is easier for a plaintiff to convince a jury of six than a jury of twelve. Time will tell if the ratio of plaintiff/defense jury verdicts changes after implementation of the new law.