The unfortunate limitations of some accident surveillance videos

When a new case comes in one of my first questions for the adjuster or business owner is whether surveillance video of the accident is available. There is usually no easier way to uncover the truth behind the allegations in the plaintiff’s complaint. But frequently (and unfortunately), even with surveillance video, the truth of what happened is not definitively revealed—at least not to the point where it completely undercuts opposing counsel’s case. Let’s look at a few reasons why.

Even with ever-improving technology, often surveillance video of an accident is simply not very good. This is often because the quality of the picture is poor. Sometimes the video is too grainy or the system does not take actual video but rather second-by-second still shots that are then spliced together. Another issue is camera placement that either cuts off part of the scene of the accident or is too far away to be definitive. These technical limitations often result in an inability to determine the exact cause of an accident or nature of an alleged defect, especially with trips/slips and fall cases. While the video is often quite helpful in the defense of a case (and is usually better than nothing), the technical limitations of the equipment at times allow opposing counsel to continue to make arguments as to why the defendant should be liable, no matter how implausible.

Which brings me to the next issue—it would seem that a summary judgment motion supported by surveillance video of an accident would be a slam dunk for the defense. And it can be. But since summary judgment requires a determination by the judge that no material question of fact exists between the parties, technical limitations of surveillance equipment that allow opposing counsel to continue to argue that the facts are contrary to what appears on the surveillance video (and contrary to the defense argument) can work to persuade a judge to accept that issues of fact still exist, which must be ruled upon by a jury. 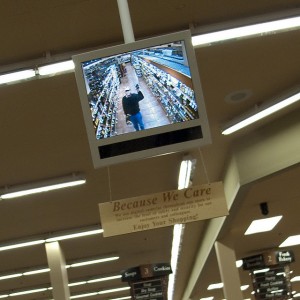 This can happen even when the video is of good quality and shows the moment of the accident. For instance, where proper lighting is at issue, we have seen judges accept plaintiff’s argument that there is an issue of fact of how well lit a space really was when the plaintiff simply testifies that he/she remembered the area being darker than what is shown on the video—even if there is no argument by the plaintiff that the video has somehow been altered to lighten the picture. Additionally, the length of a surveillance video can also affect whether summary judgment is granted, especially in cases where the defense argues that not enough time elapsed for the business to have had sufficient notice of a spill on the floor that caused the plaintiff’s injury. If the video is too short, it runs the risk of either not being conclusive on the notice issue because it may not show how long the spill was on the floor prior to the accident. If the video is too long, it may show that the spill was on the floor for a long enough period of time that the defense cannot argue in the good faith that there was not constructive notice, and therefore no liability.

To some extent, it is a matter of luck

Ultimately, there is not much that can be done in practice so that surveillance video always helps to favorably resolve a case. Of course, it is likely impractical for most business owners to install state-of-the-art surveillance systems and cost prohibitive for some business to install any sort of surveillance system whatsoever. The video is what it is, and good attorneys on both sides will use it to bolster their case. Sometimes it is simply a matter of luck how well the accident was captured on video.  However, by keeping the above issues in mind, adjusters and business owners can more effectively capture and preserve video that will allow for the most efficient resolution of new claims.